With their luxurious fur, long-haired cats are a delight to live with. Many fans of these cats maintain that their personalities are as unique as their fur is beautiful. If you want to share your life with one of these gorgeous cats, however, you will need to give it extra attention. By taking care of the cat’s fur, you are making sure that it is as healthy and happy as it can be. Here are four things to keep in mind when you’re caring for a long-haired cat.

Brush your cat frequently. To avoid matting and other issues, most long-haired cats need to be brushed often. The longer the fur is, the more often the cat should be brushed. Cats with very long hair should be brushed daily. Older cats or cats with arthritis may not groom themselves as much and should also be groomed more often. Fortunately, most cats love to be brushed, so the experience will be enjoyable for both of you. Be sure to purchase a special brush especially for cats, as other types of brushes won’t work as well or may even cause harm to the cat or its coat.

Give your cat the occasional bath. One unfortunate side effect of a long coat is that dirt and litter can get stuck in it. For this reason, it’s a good idea to bathe long-haired cats if needed. Although some cats enjoy baths, many others find bathing stressful. Cats are best introduced to baths as a kitten, although older cats can be trained to enjoy them as well through a slow introduction. Be sure not to bathe your cat more than once a month unless absolutely necessary. Frequent bathing can dry out a cat’s skin.

Carefully remove any mats in the cat’s fur. The longer the cat’s fur is, the more prone it is to matting. When tackling matted fur, the first step is to attempt to gently comb or brush it out. If the mat is too thick, you can use clippers to snip it away. Be sure to use cat clippers that you buy at the pet store, since scissors could harm your cat.

Be on the lookout out for hairballs. Although any cat can cough up a hairball, long-haired cats are especially prone to it. While the rare hairball is not overly concerning, it’s a good idea to minimize them as much as possible for the cat’s health and comfort. Some ways to help reduce hairballs include feeding moisture-rich foods and adding fiber and omega-3 supplements to the cat’s diet. Regular brushing also helps.

Long-haired cats bring beauty, grace, and fun to any home. With tender loving care, you can be sure that your cat’s coat will be beautiful for years to come.

A Quick and Cheap Scratching Post Your Cat Will Love 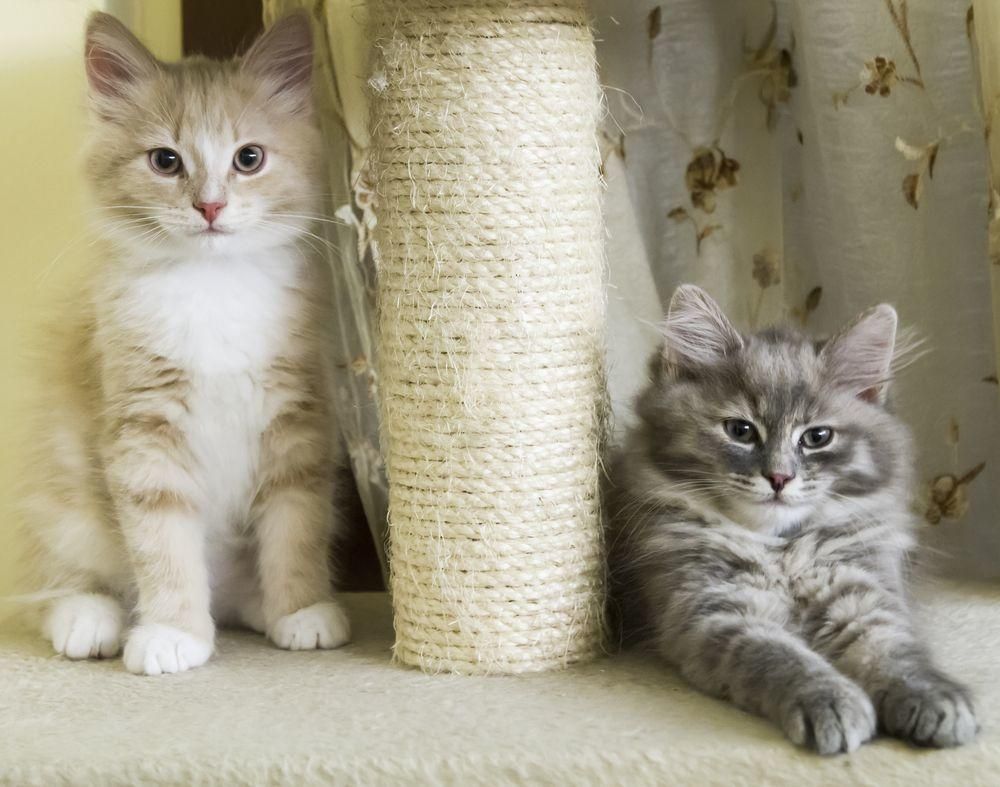 Scratching posts are a great idea, at least in principle. Give your cat a place to expend all that destructive energy, and save your furniture! Unfortunately, many cats are unsurprisingly persnickety, and more often than not after a first inspection your fancy new scratching post will never again rate so much as a glance. How can you convince your oh so discerning feline to actually use what you provide?

Cats scratch away at whatever is available to them in order to clean and sharpen their claws, an instinctive behavior they will engage in no matter how much you discourage them. It’s all well and good to tell them no when they have a go at your couch, but unless you provide them an alternative, it’s unlikely to stick. That alternative needs to be at least as good as your furniture if you want it to see use.

Cats look for three things in their scratching spots: stability, size, and texture, and the generic posts you can buy at any pet store fail two out of three of these considerations. If you’ve ever really watched your cat sharpening their claws, you know they put their full backs into it, and all but the most solid of posts will wobble or even tip over under this treatment, especially for larger cats. Cats also like to reach up high and dig in with both claws at once, and most posts are a bit too short and too narrow for this treatment.

A quick look at on-line source will reveal an enormous number of plans for homemade scratching posts, of varying quality, and many do work quite well. If that’s your preferred route, look for one of the larger, heavier models. There is, however, an easier, cheaper option. You almost certainly have any number of surfaces in your house that meet the size and stability requirements, but are only missing the third consideration, texture, and this can be quickly fixed.

First you need your texture. If you happen to have any old pieces of shag carpeting lying around, those work well, but otherwise a well-textured sisal or fabric welcome mat is perfect in both size and material, and should be available for about ten or fifteen dollars at any home goods or hardware store.

Next you need a surface. An out of the way door frame is probably the best spot, but any really solid location will do. If you do use a door frame, it’s just a matter of wrapping the mat or carpeting around the bottom corner of the frame, and fixing it in place with a staple gun or small tacks. Running it lengthwise up from the floor will create a surface tall and wide enough for any cat, and pulled tight and stapled securely it will be as solid as your house itself. Don’t worry too much about damage, the tiny holes the staples leave can easily be fixed with paint alone, and even tacks will only require a swipe of filler. Now just introduce your cat to their new post, and hope they take the hint!

For less than twenty dollars and five minutes of work you can have a rock solid, easily replaced scratching spot that will hopefully have your cat turning up their nose at the inferior option provided by your furniture, rather than the other way around.